TODAY WE ARE CANCELING THE APOCALYPSE

Group Shot from the Pacific Rim Meet Up! – Picture by Pat Loika

Want to know what’s even better than an online Pacific Rim convention?  A meet up with several dozen other fans at a convention!  At Dragon*Con the other weekend, we got to do just that!

We reached into our Jaeger Con closets the Saturday of con for our Mako Mori and Girl!Tendo Choi costumes and wandered around the hotels for a few hours with double lattes and a bagel in hand.  It was awesome every time someone recognised our costumes and (inevitably) mentioned how much they loved the movie.

Around 2pm, we made our way towards the meet up point and ended up finding some other Pacific Rim fans along the way.  Despite the meet up not officially starting for another half hour, it wasn’t long before there were a fair number of us in that smaller-than-it-looks-hallway positively bubbling with enthusiasm.  There were cookies and Gipsy Danger pins and a heck of a lot of drift compatibility going on.

And then I somehow ended up directing the photoshoot.  I’m still not really sure how it happened but I do know that I ended up dragging my dear friend and fabulous photographer Pat Loika into it with me as our impromptu official photographer for the meet up.

Someone remarked to me later that it was kind of perfect that I was dressed as Tendo for all of this.  Mostly, I am glad that I could put by loud voice to good use and that none of my fellow attendees thought the jokes I was cracking in between setting up shots were too terrible.  And that I can say my photoshoot directorial debut went smoothly.

We got both large group shots of everyone and then everyone in costume (and everyone being silly) and shots of smaller groups with the same or related costumes.  Spoiler Alert: The Newts were the overwhelming majority.

Although I kept the pictures moving at a fairly brisk pace (because Atlanta heat is brutal and there was a huge photoshoot starting soon), it seemed like everyone was still definitely enjoying themselves especially when we got to take some fun shots like Gipsy Danger taking on a kaiju… 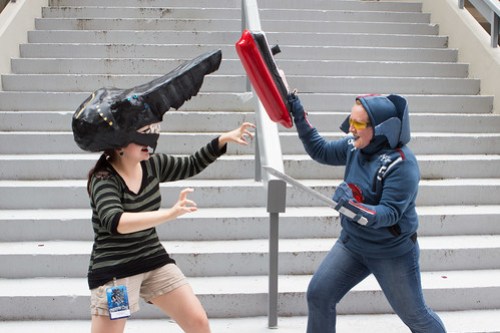 …or all of our Newts reaching longingly for the kaiju… 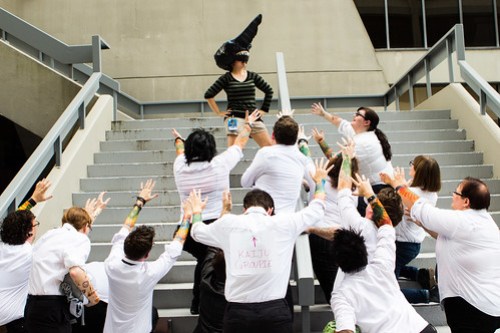 …and, of course, the appropriate appreciation for the Hot Dads of the film. 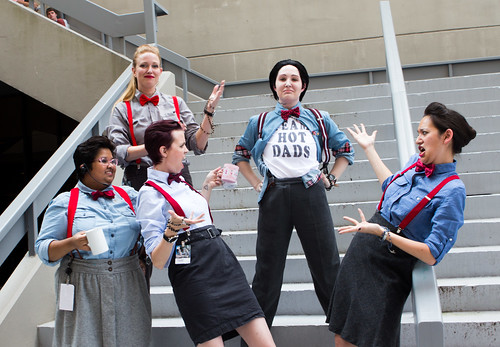 Don’t ask what my face is doing in this picture. I won’t have a good answer for you.

Thank you so much to everyone who attended the Meet Up.  It was absolutely a group effort by everyone and it wouldn’t have been nearly as lovely if we haven’t had everyone there.   Honestly, we both had so much fun and we’ve never experienced a fan gathering quite like that before.  It was quite excellent getting to meet all of you and we look forward to next year!  Until then, we’ll see you in the Drift!

Don’t forget to check out the list of attendees and the plans for Shatterdome Atlanta!

Don’t forget to check out all the pictures from the Meet Up over on Pat Loika’s Flickr account!

Hey everyone!  It’s been a little while but we’re finally back. Sorry if we didn’t post to Twitter and Instagram as much as we would have liked — internet was virtually non-existent in the black hole that was the con.

But once again, Dragon*Con was four days of crazy and awesome and tons of costumes, and we definitely partook in all of those — in the coming weeks, we’ll be sharing pictures and our cosplays! In the meantime, here’s a sneak peek from our Instagram:

Tendo Choi slides into the apocalypse fifteen minutes late with double Starbucks in hand and a bagel in her mouth.

Miss out on the Jaeger Con festivities?  That’s okay.  We’ve got you covered.

We’re cancelling the apocalypse this weekend at Jaeger Con 2013, so strap yourself in for a 4-day Pacific Rim party. Check back in with us here for the final post count, and don’t forget to kick back relax with us over on tumblr as we celebrate another giant robot weekend.