Your October Her Universe Update

With all of Her Universe’s success over the past few years in addition to their branching out, it’s been getting harder and harder to keep track of all of their new items!  So for today’s post, we’re going to try and sum up everything that you might’ve missed over the past few weeks.  Be on the look out for more product releases in the future though as Ashley’s told us that Star Wars Rebels gear is forthcoming and has already tweeted a teaser image of Darth Vader stud earrings!

First up, they’ve been running a fantastic The Walking Dead sale for both Halloween and in honor of the show coming back.  They’ve actually got a great selection of items across their fandoms on sale including a ton of their Star Wars stuff.  And if you’re a Daryl fan, check out this tank top that I hadn’t noticed before now that slipped quietly on to Hot Topic.

Tis definitely the season for new items though and they’ve been rolling them out over the past few weeks.  On Think Geek, you can now stock up for fall and Winter with brand new Star Wars and Star Trek long sleeve or hooded shirts!  They’ve also got this AMAZING Storm hoodie that GLOWS IN THE DARK.  (Seriously.  It’s fabulous.) 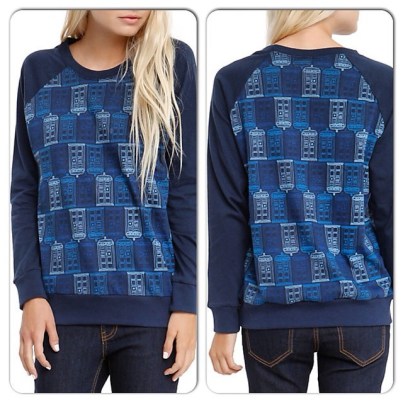 Just announced today was this Doctor Who sweatshirt that’ll be available on Hot Topic.

And finally, Her Universe has more new things on the Marvel front.  The Xavier’s Cardigan that they first sold at SDCC is FINALLY online on both their site and Think Geek.  What came out of the blue was the Spider-man tank which is of similar style to their Captain America, X-Wing, and Boba Fett tank tops.

Don’t forget to partake in their Halloween contest to have the chance to be one of seven winners of a $50 Her Universe gift card!

Why be inspired by anything less than a queen? Ororo Munroe is class unmatched, and we continue Uncanny X-Force Week by streetstyling her Kris Anka design for a look of fierce femininity.

Because the comic gods have seen fit to rip one of our most beloved books from our grasp, we’re honouring its end in the only way we know how: Welcome to Uncanny X-Force Week.

Welcome to the first post that we’re contributing to a feature over at Women Write About Comics! They’re running an ongoing series on Race, Gender, and Comics and we absolutely recommend that you go check it out — it’s great, and something we obviously care about a lot.

Today we look to one of the greatest leading ladies, Ororo Munroe, who took us through a veritable style change throughout the years. A colour story in black and golds, and a walk between royal grandeur and haute punk revelry, there is nevertheless always something deeply elegant about her.

Have you checked out Sam Humphries and Ron Garney’s Uncanny X-Force #1 yet?  No?  I’m here to tell you that you absolutely should.  After the amazing run that Rick Remender had with the first volume of this book, I didn’t think it would be possible for this relaunch to come even close to that level.  Gosh is it wonderful to be wrong because this book is going to be a great read.

Before I even talk about the story, I have to discuss the artwork because this is a positively GORGEOUS book.  I’ve been digging the costume designs by Kris Anka since day one and they have been translated beautifully to the page by Ron Garney’s pencils.  I’m also enamoured with the colouring done by Marte Gracia and Israel Gonzalez.  The palette they’ve worked with is stunning.  I’d happily read a book with this artistic team up for ages.

Since we last saw Psylocke in the pages of Uncanny X-Force, she’s completely dropped off the face of the earth for six months only to finally reappear and figure out that teaching at the Jean Grey School for Higher Learning really isn’t going to work out.  (Seriously.  It’s just not working out.)  Logan suggests she takes some time off to clear her head and gives her a mission.  Who better to go along then Storm?  (Another X-man who really needs the time off to clear her head.)   And, well, things go from there.  I won’t spoil it for you.

This is a great first issue and definitely left me wanting more.  (That last page… THAT LAST PAGE.)  The premise of the first few issues has been introduced as have all of the team members, but exactly how this bunch are going to end up as a cohesive team will certainly be interesting to see as the book continues on.  There’s nothing I love better than a team that’s filled with both people who are good friends and people who just do not get along at all, and this team looks like it’s going to have both.

I also think that this book has the potential to be readily accessible for readers who weren’t along for the first Uncanny X-Force ride.  Humphries gives you most of the context that you need within the issue, and also introduces the characters to those who might not be familiar with them.  It also looks like it’s not going to come with the insane levels of emotional baggage that its predecessor did, which definitely helps make it accessible to more readers.

Again, I can’t reiterate enough how gorgeous I thought the art for this issue is.  This creative team just works so well together to produce a really nice first issue.  This has the potential to be the “craziest X-Book ever” but also a pretty darn stellar one.  I highly suggest you head over to your local comic store or to comixology and pick up the first issue and give it a try.

(You can also check out the fashionable Psylocke and Spiral outfits that Lin and I rocked earlier today in honour of the book’s release.)