Conventions are increasingly becoming more and more of a celebration of geek fashion and this year’s Star Wars Celebration was no exception. There was a geek fashion vendor down almost every other aisle and they were offering far more than just the standard t-shirts that used to be the hallmark and the unfortunate extent of geek “fashion.” As everyone knows, that changed about seven years ago when Her Universe launched and fans haven’t looked back since. Thankfully.

We already brought you an up close look at the Musterbrand and Po-Zu booths but they were far from the only non-t-shirt vendors. Loungefly, ThinkGeek, and WeLoveFine all had a strong presence (and very busy booths.) Her Universe was equally busy… or at least that’s my best guess. Unfortunately, their booth was inside the Celebration store which was an approximately 5 hour endeavor if you wanted to buy something. (2+ hours wait to get in and another 2+ to check out… ridiculous is a kind term for it.) At least now the Celebration collection is available via the Her Universe and Hot Topic websites.

There were a few geek fashion related panels. The Kessel Runway presented a geek fashion panel on the Collectors track. The biggest announcements came from the Disney Parks panel where Her Universe revealed their new line that will be coming exclusively to the parks. The collection leans a little more vintage/retro (especially with the poodle skirts) but that’s not surprising given some of Disney’s more recent fashion releases. There is also a Rey vest/arm warmer combo and a Padmé and Leia shirt that looks intriguing. You can see all the designs at the above link. Personally, I’m most interested in the Tatooine dress and the BB-8 hoodie because that just looks COMFY.

END_OF_DOCUMENT_TOKEN_TO_BE_REPLACED

It wasn’t hard to find the Musterbrand booth at Star Wars Celebration this year… all you had to do was follow the sound of excitement and backtrack those walking away with some fabulous jackets in hand. Every time I walked by their booth, they were quite busy with plenty of fans, both men and women, interested in their line of high quality jackets and sweaters and for good reason. They make a damn good product. One of my con roommates even happily walked away with their incredible TIE pilot inspired leather jacket.

I’d previously purchased their Cassian Andor jacket and honestly haven’t been able to shut up about how much I love it to people both online and in real life. Frankly, it was fantastic to see how many people were not only interested in Musterbrand’s line but also happy to spend the money for quality work. It also helps that I cannot say enough good things about the people working the Musterbrand booth all weekend as they were all incredibly nice and helpful and made the booth a lovely place to visit. If you ever have a chance to stop by their booth at a convention, I absolutely recommend doing so.

While they were only on display on Thursday, Musterbrand’s newest offerings were the talk of certain circles at the convention. In the very near future, they’ll be officially debuting their first line of shoes with some fantastic Star Wars inspired designs. [Editor’s Note: The Skywalker and Darth Vader sneakers have been put online for preorder.] The designs range from the slightly more obvious to the more subtly nerdy inspired. My personal favorites are the Leia inspired flat and the Rebel pilot sneaker as they’re not quite like anything we’ve seen on the market thus far. Having gotten my hands on the shoes, I can personally attest to the quality. Musterbrand has put the same amount of thought and care into their shoes that they’ve put into their jackets which makes for a winning combination. (Stay tuned for a closer look at the sneakers in the coming weeks…)

During the convention, Musterbrand’s founder and CEO Knut Bergel was kind enough to chat with me about Musterbrand’s start, the design process, and what we might see in the future. The transcript of our conversation is below: END_OF_DOCUMENT_TOKEN_TO_BE_REPLACED

Rebels Rebels Rebels… how does one describe that panel? Well, emotional whiplash might be a good way to start. Actually, there’s not really a better way to do so. Over the course of the 2.5 hours I spent in the panel room (they loaded the press in very early,) I went from being super happy to super sad back to happy to… well, we’ll get there.

The big news that came out of the panel was that Star Wars Rebels will be ending after Season 4 and some new animation project will take its place. This isn’t earth-shattering news as people have long suspected that Filoni’s been working on something else but it was sad news nonetheless. Personally, I expected (and hoped) to get five seasons out of the show. However, as Filoni pointed out, it’s good that Rebels will wrap up on their own terms. Just take a look at The Clone Wars and its continuously adoring fandom if you need any proof. On the other hand… it is ending. For me, Rebels has been what The Clone Wars has been for so many others. It resonated with me from before the first episode even aired and not just because we had an Asian teenage girl as one of the leads. The found family fighting for something bigger than themselves hit me right in the gut and I can’t quite find the words for how much I love the team on the Ghost. I’m sure that I’ll love whatever show comes next but… it just won’t be Rebels. END_OF_DOCUMENT_TOKEN_TO_BE_REPLACED 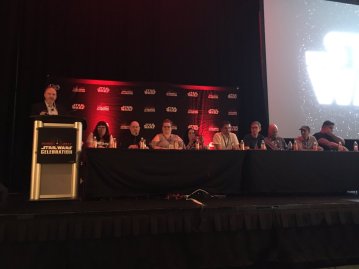 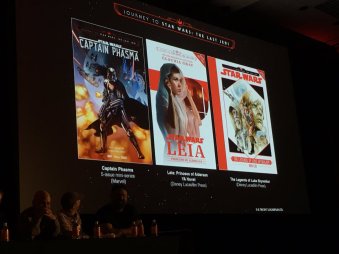 Lucasfilm officially announced the “Journey to Star Wars: The Last Jedi” campaign; a clear follow up to their “Journey to Star Wars: The Force Awakens” campaign from last year. (Get your #JtTLJ hashtags ready.) Expect to see a looooot of the same for what we saw with JtTFA in terms of supplemental material when it launches in September. The biggest announcements, oddly enough, had to do with the same character. Delilah Dawson will be writing a Phasma book for Del Rey and Kelly Thompson and Marco Chechetto are doing a Captain Phasma comic for Marvel. Phasma will be back story for everyone’s favorite shiny stormtrooper while Captain Phasma will cover how she gets off of Starkiller Base. It’s an interesting choice to have two major parts of JtTLJ focused on the same character and seems like a good indicator that Phasma will have more of a role in The Last Jedi. END_OF_DOCUMENT_TOKEN_TO_BE_REPLACED

Star Wars Celebration in Orlando, FL is this week and AHHHHH THAT MEANS WE GET THE LAST JEDI TRAILER SOON!!! Bria will be attending and even though she promised herself that this wouldn’t be a heavy costuming convention, she’s somehow got a full schedule anyways. You can see her costume schedule below and also catch her at the Carrie Fisher Memorial Gala on Thursday night and on the Women in a Galaxy Far, Far Away Panel on Sunday at 3pm on the Fan Stage.

Bria will also be covering the convention as press so keep an eye on both her Twitter and our WHR twitter for coverage of Celebration including interviews! Also… if you find Bria… she’s going to have some ridiculous pins on her to give away. It’s going to be great.