It may be a few weeks later than expected but the Her Universe website is finally back!  Now available are both a bunch of brand new designs along with plenty of older designs.  (As a note, you can now get some of the previously Hot Topic exclusive designs directly from Her Universe! Consider it a benefit of the acquisition.)  If you sign back up for the mailing list, you’ll get a coupon code for 25% off your entire purchase.  The code is good for 14 days.

There are a lot of cool new features on the website including a calendar for conventions etc where Ashley will be making an appearance.  Fangirl of the Day is back wants your nominations.  Also, you can now filter the website based upon size and by fandom.  Honestly, it’s well worth it to head on over to the website and check it out.  Even the logo is sparkly and new!

Most notably though, Her Universe will have a brand new Leia shirt in honor of Carrie Fisher.  The design can be seen in the tweets below and says “Self Rescuing Princess.”  All proceeds from the shirt will go to charity.  Expect to see it hit HerUniverse.com within the next week.

Some of my favorites from the new pieces are below. I suspect the denim jacket is going to be very popular.  And there’s even a blanket available!!

You can read our entire livetweet of her Facebook Live video below or watch the entire video for yourself. Some of the highlights include that we’ll be getting an Ahsoka collection, a Loki collection is coming in the fall, the men’s fashion line will be called Our Universe and hitting around Christmas, AND we’re finally getting a Hera Syndulla shirt for Star Wars Celebration.  END_OF_DOCUMENT_TOKEN_TO_BE_REPLACED

As you’ve undoubtedly already heard, Hot Topic has acquired Her Universe.  That definitely made plenty of us on Twitter go “Wait what?” and “Holy $#!)!” on Friday night.  We got a letter from Ashley and the official press release.  From the press release:

“We are very excited to partner with Ashley Eckstein and Her Universe,” said Steve Vranes, CEO of Hot Topic.  “We have worked closely with Ashley, Araca, and Her Universe over the past six years, together bringing fangirl fashion to a growing community of passionate fans. Ashley and Araca have built an incredible brand with a loyal customer base, and we look forward to supporting Her Universe in this new capacity.”

“I am thrilled to be bringing Her Universe to the Hot Topic family of brands,” said Ashley Eckstein, Founder of Her Universe. “Six years ago I founded Her Universe with the mission to create an empowering community and t-shirt brand for fangirls. We’ve since grown into a fashion, entertainment, publishing and lifestyle brand. Operating as a division of Hot Topic, Her Universe will continue to be a stand-alone brand selling to various retailers but with the support needed to grow the company in ways I have always dreamed.”

But what does this mean?  According to Ashley, the big things won’t change.  She’s still going to be running Her Universe and Her Universe designs will still be available at current retailers (ie: Kohl’s, ThinkGeek) and also via HerUniverse.com.  (Although the Her Universe site will be going down for a few days but will relaunch in time for the holidays.)  The biggest changes all sound like they’re going to be positive ones.  More plus sizes are going to be available and the partnership with Hot Topic will enable them to ship to Europe and also allow them to create designs for more licenses than they already do.  Her Universe will also begin doing designs for men.  (If you’re concerned about this, they won’t be doing men’s basics but rather men’s fashion.  In other words, they’re not going to be doing t-shirts for guys.  The focus will still remain on fangirls.)  The Fashion Show at SDCC will still be sticking around and Her Universe Press will be relaunching.

Essentially, it sounds like this will allow Ashley to focus more on the creative side of the business instead of the budgeting/monetary etc side too.

You can watch Ashley’s entire Q&A live video from Facebook below:

Essentially, I believe that this will end up being a good thing but it certainly will take some time to see how things work out.  I’ve seen some concerns on Twitter about quality and sizing and availability.  Availability sounds like it’ll remain the same and sizing has clearly been something that Ashley’s been working very hard to improve since Year 1.  As for quality?  Well, that all depends on your point of view.  I’ve always found there to be variance within the brand especially when you look at the cardigans.  (ie: I found the Grand Moff/X-Wing ones to be highly superior products to most of the other cardigans that have been released.)  That said, I think that looking at the quality of pieces like the Darth Vader leather jacket and this latest Marvel collection are all good signs.  And overall?  This is Ashley and Her Universe that we’re talking about here.  She’s always tried to do right by the fangirl community since day 1 and I don’t ever see that changing.

Congratulations to Ashley Eckstein on being able to do so much with Her Universe in just six years and I can’t wait to see what’s next for them as a part of Hot Topic.

Basically all we needed to hear to get excited about a Kickstarter were the words ‘fashion’ and ‘comics’ so yeah.  We are all about Couture.  To quote from their page:

Couture is a collection of short comics inspired by iconic moments in fashion. Influenced by designers from Christian Dior to Hussein Chalayan, Couture’s short stories span romance, science fiction, historical drama, fantasy and horror, drawing from fashion that shook the runway and changed the face of haute couture. Written by Dani Colman and featuring art by 15 award-winning artists, Couture will be available as a handsome hardcover that is as much a piece of art as the stories within it.

The artists include Kevin Wada (!!!) and Jen Bartel and Marguerite Sauvage amongst others and we could not be more excited to see the finished product.

You can go back the project over on Kickstarter and reserve your copy now.  (We already have!)  They’ve also got some super neat backer levels with exclusives that you won’t be able to get anywhere else.  We highly recommend it. 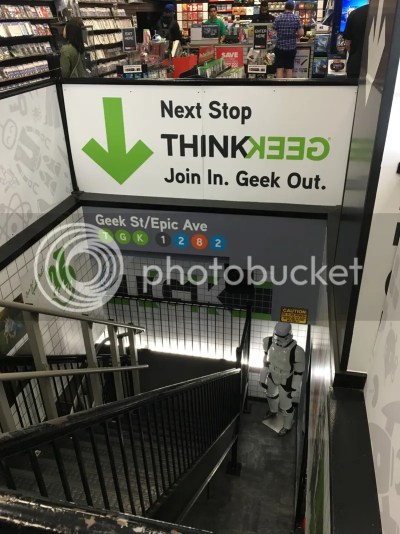 This weekend, my trip to New York City happened to coincide with the grand opening of the fourth ThinkGeek IRL store!  Naturally, I had to check it out.

Walking into the store was like walking into a physical version of their website albeit far smaller.  I definitely loved the little NYC/nerd touches they added like the fake subway sign pictured above.  The biggest draw back is that they’re working with a relatively space and can therefore only feature a small fraction of their inventory.  They make the most of the space available and have a little bit of everything.  It’s unlikely that anyone will walk in and not find something that they want to buy.  That said, I’d love to see them up their selection of geek clothing especially given their proximity to the Garment District.

What they definitely have working for them is a friendly staff who are more than happy to chat and help you out.  Everyone there couldn’t have been nicer and made my experience shopping there lovely.  Shout out to the cashier who heard me say that I was going to get myself in trouble in that store and then later on say she wanted to be the one to ring up the trouble maker. 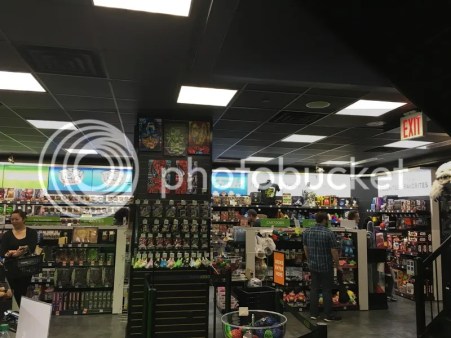 And if you think I walked out of the store without buying anything… yeah, you probably haven’t been reading White Hot Room very long because I have terrible self control in these situations.  I’m happy to say that I’m now the owner of this awesome Captain Phasma Loungefly purse (which was a total steal at only $42!!!) and this A New Hope Opening Crawl bracelet from Love and Madness! 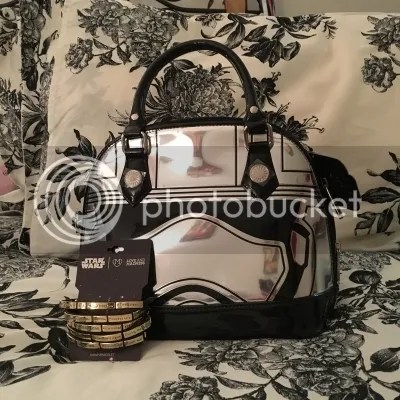 If you want to check the store out for yourself (and you absolutely should!) head over to 33rd and Broadway.  ThinkGeek is in the bottom half of the GameStop there.  They are open from 9-9 on Monday through Saturday and 10-8 on Sunday. 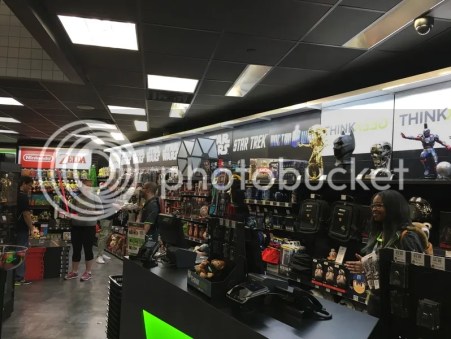 We love a good sale. We especially love a good sale from one of our faves. Black Milk doesn’t go on sale that often, so we’re here and we’re ready for this. Have a fun weekend out there!!