Her Universe returned on Thursday night with their Third Annual Her Universe Fashion Show! Once again, 27 designers beat out all the other entrants for the chance to show their geek inspired work at San Diego Comic Con and have the chance to co-design a collection with Ashley Eckstein for Hot Topic.  The twist this year?  There are going to be three winners: Judge’s Choice, Audience’s Choice, and the final will be voted on by those watching the reality show!

As always, the show started out with a runway of some of Her Universe’s current and forthcoming designs.  There were no sneak peaks of anything Star Wars but it looks like there’s an adorable Star Trek collection coming to ThinkGeek and a Marvel one coming to Hot Topic.  You can see some of the models below.  There are also new Studio Ghibli designs coming and, interestingly enough, shirts for Electra Woman and Dyna Girl.  That Peggy Carter dress is going to sell out in a heartbeat to have your credit cards ready. Oh! And the word on Twitter is that the Finn jacket and the Rey cardigan will make their way back to stores in the fall so we’ll all get another chance to buy them if we missed out the first time.  Check out Galactic Fashion’s Instagram for a closer look at the model sketches for what walked the runway.

Our GORGEOUS Her Universe models backstage at the Fashion Show!!! #heruniversefashionshow #sdcc

Ashley’s wardrobe for the occasion did not disappoint.  She only had one dress this year but it was an Ahsoka Tano dress made of LEGOs.  Just let that soak in for a minute.

Want to see my LEGO dress up close? Come to the @entertainmentweekly Con-X stage TODAY at 4:30 at the Embarcadero where @nathansawaya @andrewmaclaine and I will be doing an interview about this dress! Plus I will be signing Ahsoka autographs afterwards! Hope to see you there! #sdcc (📸 by @kelseyedwardsphoto )

As for the contest itself, it was an interesting mix of designs this year.  People certainly seemed to have learned from the previous shows and emphasized the theatrical: transforming gowns and LED lights were definitely present.  This was also apparently the year of Harry Potter.  You can see pictures of all of the designs over at PopSugar.  My favorites are probably the Captain Phasma and the Mad Max dresses.  A returning designer put forth a Neverending Story gown which was, once again, a showstopper. 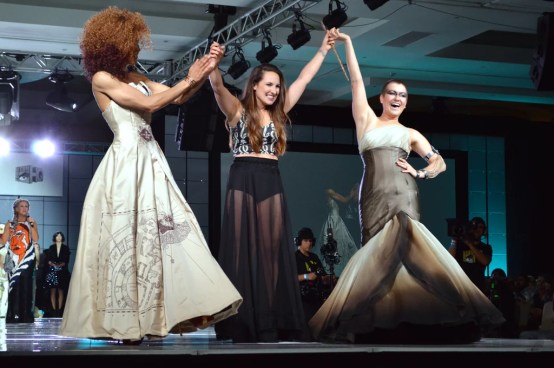 You’ll get to see their collection at Hot Topic in May of next year.

Have any favorites from the show? Dying to get your hands on any of the teased Her Universe looks? Is the designer in you itching to start working on your own design?

I have a Star Wars problem and by problem I mean that I’m all about the First Order.  They’re going to put ‘First Order Trash Queen’ on my tombstone at this point.

[WAYW] For My Ally is the Force – Star Wars

Why yes, sometimes I do buy dresses specifically because they make me think ‘fashionable Jedi’ and then wear them to the theatre.  I figured I was prooobably doing something right when the ladies at the front desk complimented me.

[INTERVIEW] Spotlight on The Colorful Geek

It’s our second interview from Awesome Con last month! In June, I had the chance to chat with the awesome Elena from The Colorful Geek who just happened to have the booth next to Jordandené.  We talked fandom, geek fashion, and a lot of Percy Jackson!

How did you get involved fandom?
Quite a few years ago, Harry Potter was like my [fandom] drug. For some reason, I had resisted reading it for years and years and then I went on vacation with my friend who was on business and I was at the hotel’s pool every day. I bought the Harry Potter books and I read them there and it was over after that. I was immediately addicted and read the entire series. I think it was 2003? I read the entire series as quickly as possible and then the next one came out. Right before the last book came out, someone told me what a podcast was and I just started listening to all the Harry Potter podcasts and it was like crack. They started talking about a Harry Potter convention up in Canada: Prophecy. I went by myself, got a room full of people, and that was pretty much the start of my fandom was there.

It was that convention that kind of started all of this stuff because back then, you couldn’t find a shirt like mine or like Jordan’s. I looked and I found some really ugly ones so I went to Target and bought some cheap tank tops and went to a craft shop and bought letter-shaped sponges and I just stamped Harry Potter stuff on them. END_OF_DOCUMENT_TOKEN_TO_BE_REPLACED