One for the road — podcast, and happy weekend!

In case you missed it, Bria was recently a guest on Tosche Station Radio, a “weekly sojourn into Star Wars and Geek Culture news and discussion”! Along with hosts Brian and Nanci, she’s joined by Heather of zhobot.net for a a fun and lively discussion — you can check out the show notes and download the podcast here. Definitely recommended if you love Star Wars and cosplay, and want a sneak peek at what’s coming up here at White Hot Room. (Spoilers: if may or may not involve dinosaurs.)

And with that, we wish you a great weekend!

[WAYW] Those Of Sharpest Mind — Ravenclaw

While I may not be a Ravenclaw by heart nor choice, I can certainly try to rock the frock. Nestled in a space not quite of this time and not quite of this world, my Ravenclaw is a librarian’s vintage velour made modern by leather accents and spikes — a sharp touch for a sharp mind. With specs as a salute to Lovegood and a stylised feather for house pride, it’s like you won’t even notice I’m holding a Reader’s Digest tome.

Sorted into Slytherin? No problem. Bria has you covered with her inspo outfit right here!

For all my ladies out there living the mermaid appreciation life — here’s your comic book plot twist. Rock it like the queen of the sea with plunging necklines, gold accents, and a sleek silhouette punctuated with cool ocean tones. Because sometimes you just need to be a Namor in the streets and a Namor in the sheets.

[WAYW] Those With Great Ambition – Slytherin

Sometimes, there’s no point in even pretending to lie.  This post is all about the jacket.  Desigual excels at creating statement pieces and adding this to my wardrobe a few years ago was a thrill.  I adore the patchwork of gorgeous fabrics and all the cool buttons they found to go with it.

It also just so happens that the Sorting Hat placed me in Slytherin so who am I to blow against the wind?  An outfit post it is!  Okay, it’s not that I’m evil.  I’m just ambitious.  And know what I want.  I promise I’m not biased against Muggle-borns!

While large conventions certainly have the ability to offer a wide variety of programming, dozens of guests, and huge artist alleys and dealer rooms, small conventions absolutely have their own charm and appeal.  Last weekend, I attended the 2nd Annual Eastern Shore Fan Convention in Princess Anne, Maryland along with Heather and Nate of Zhobot and Denis.  To be honest, we had no idea what to expect.  All of us were fully prepared to walk around the convention for a few hours, take pictures, and leave.  Instead, we were beyond pleasantly surprised.

The best word we could think of to describe this convention was “cozy”.  It was small, of course, but it was neither empty nor overly crowded.  The Artist Alley/Dealer room was filled with friendly vendors and artists who were more than happy to chat.  Of course, it certainly helped that almost all of the ones I chatted with were able to identify my costume as Echo.  (The problems with costuming as a superhero who’s not on the A or B-list.)

Other highlights included the game room and the Maid Cafe.  The game room was filled with consoles and plenty of retro games that had many a person smiling from nostalgia while they played.  This was also the first time that I and my friends had gone to a Maid Cafe and we can’t say enough wonderful things about everyone who worked there.  Apparently attendance numbers went up drastically from last year and therefore the cafes weren’t as well stocked with food as they’d hoped.  However that didn’t stop any of the Maids from being incredibly sweet and adorable and making the entire experience enjoyable. 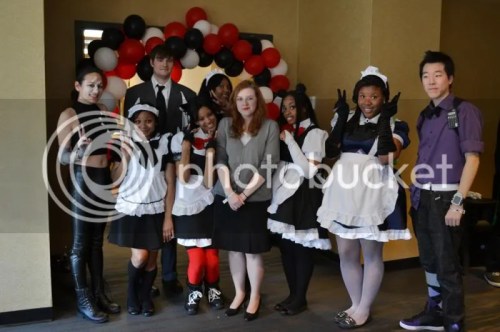 There were also plenty of costumes present!  The convention offered $2 off admission to anyone who attended in costume and a decent number of people took them up on it.    The only thing I had issue with was the judging of the costume contest since I thought that there were several wonderful costumes that should have been recognized and at least placed.  However, I do understand that judging can be rather subjective.  On the other hand, the contest was quite fun to watch especially since so many first time cosplayers entered.  All of them clearly had fun diving into the hobby.  I was especially amused by the one guy who gave great credit to Amazon and his Visa card for completing his first cosplay.  I’d be remiss if I didn’t mention the winner of the Children’s Cosplay Contest: Tiny Deadpool in a Dress.  Yes that is exactly as adorable as it sounds and the small girl was AWESOME.

As I mentioned above, I decided to wear my Echo costume again and it was considerably more enjoyable to do so in not-Atlanta weather although it did get a bit chilly when the sun went down.  As always, I got to shoot with my favourite photographer, Heather!  Enjoy a teaser shot from the shoot!